Nammex Chaga are processed by hot water/alcohol extraction into a fine powder suitable for encapsulation or beverages. 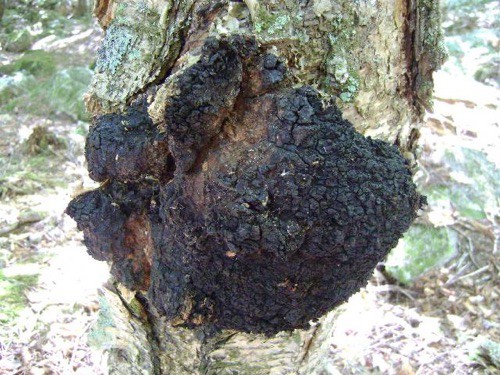 No added fillers, starch or grains

Wild Chaga grows naturally in the vast forests of Canada, Russia, northern China and northern climatic zones where birch makes up the primary tree species. *Even though Chaga is commonly referred to as a mushroom, it is actually a sterile conk or canker, a hardened mass of woody tissue with an amorphous shape and dark pigmented outer layer. It has been estimated that Chaga consists of only 10% Inonotus obliquus mycelium. Being a tree pathogen, Inonotus mycelium slowly grows throughout the tree trunk, causing decay and ultimately death. The canker/conk we call chaga, is a manifestation of this fungal disease. For hundreds of years Chaga has been wildcrafted and utilized by the people of northern Europe and Russia.

Birch trees contain precursor compounds such as the triterpenoid betulin. Chaga draws betulin and other precursors directly from the birch tree and turns them into inotodiol, trametenolic acid and betulinic acid. Chaga needs the tree-bound precursors to synthesize the triterpenoids for which it is famous.

US lab-grown Chaga is not real Chaga but Inonotus mycelium grown on grain. Analysis has shown that Inonotus mycelium on grain has low levels of beta-glucan, very high levels of starch and lacks secondary metabolites. Nammex only uses 100% organic chaga which are rigorously tested and guaranteed for active compounds. Learn more about the mycelia myth and the 10 Questions to Ask about Your Mushroom Supplement.

Note: Some US companies claim chaga is being over-harvested. There is absolutely no evidence to support this claim and positive reports to refute it.