Nammex organic Shiitake mushrooms are processed by hot water extraction into a fine powder suitable for encapsulation or beverages. 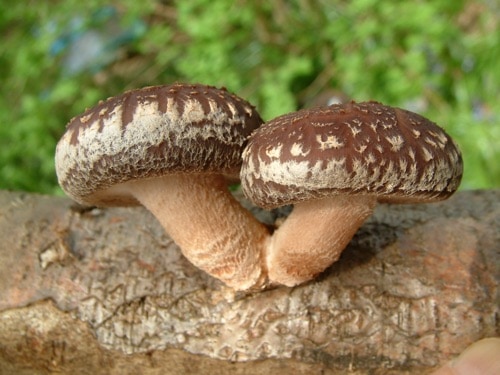 In the 12th century, shiitake mushroom cultivation began in the mountains of central China. Using fallen trees and then wood logs, early cultivators were able to plant spores and help nature produce a larger crop. A fragrant and delicious edible mushroom, shiitake is now the second most popular cultivated mushroom in the world.

In the 1970’s, the Japanese mushroom industry supported extensive research into the nutritional and beneficial properties of shiitake. The scientist Goro Chihara fractionated shiitake polysaccharides and named the most active fraction lentinan, a pure beta-1-3-glucan. This compound was developed into a product that has been utilized as an adjuvent to modern medical oncological practices.

US lab-grown Shiitake is mycelium grown on grain. Analysis has shown that US Shiitake mycelium on grain has low levels of beta-glucan and very high levels of starch. Nammex only uses 100% organic fruiting bodies which are rigorously tested and guaranteed for active compounds. Learn more about the mycelia myth and the 10 Questions to Ask about Your Mushroom Supplement.