Nammex Reishi mushroom is processed by hot water extraction into a fine powder suitable for encapsulation or beverages. Our higher value extract is also extracted with alcohol. 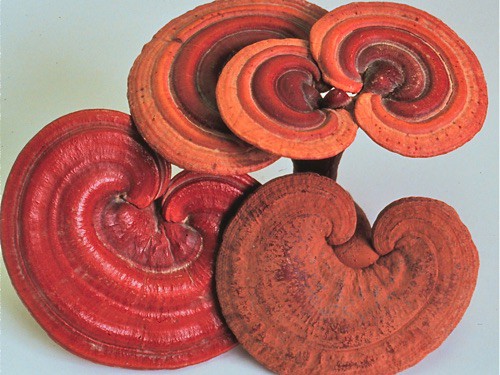 Reishi mushroom has been revered in China for thousands of years. It is depicted in many Chinese works of art and is utilized in Traditional Chinese Medicine. Today it is widely cultivated using a method of wood log cultivation in shade houses.

Scientific research into the compounds responsible for Reishi mushroom activity began in the 1970’s in China and Japan. Scientists discovered highly active beta-(1>3)-glucans with the ability to potentiate innate immunity by activating immune cells. Also discovered were secondary metabolites called triterpenoids which were present in significant amounts and sets Reishi apart from all the other medicinal mushrooms.

US lab-grown Reishi is mycelium grown on grain. Analysis has shown that US Reishi mycelium on grain has low levels of beta-glucan, undetectable levels of triterpenoids and very high levels of starch. Nammex only uses 100% organic fruiting bodies which are rigorously tested and guaranteed for active compounds. Learn more about the mycelia myth and the 10 Questions to Ask about Your Mushroom Supplement.

Beta (1>3),(1>6)-glucans; triterpenoids; Reishi needs the wood-bound precursors to synthesize the triterpenoids for which it is famous.