Nammex Cordyceps mushroom is the actual fruiting body, processed by hot water extraction into a fine powder suitable for encapsulation or beverages. 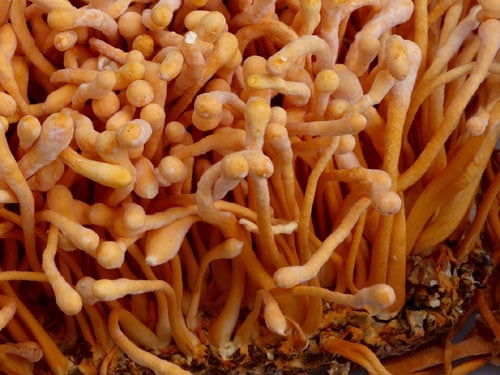 Wild Ophiocordyceps sinensis is a rare and expensive Chinese herb. It consists of a caterpillar and a blade-like mushroom body growing from one end. Its common Chinese name is “Winter worm, summer grass”. Due to the high cost of this herb, the Chinese produce the mycelium of this mushroom in liquid fermentation tanks. This pure mycelium product is primarily known as Cs-4. The authenticity of Cordyceps mycelium cultured from wild Cordyceps is not certain. Multiple cultures have been isolated from the wild Cordyceps, but none have actually produced the mushroom, a normal pre-requisite for determination of identity.

A large body of research has demonstrated that Cordyceps militaris has similar active compounds and activities to C. sinensis. Today, it is being cultivated on substrates free from any insects. It is traditionally used for fatigue, general weakness, improved respiratory function.

US lab-grown Cordyceps is mycelium grown on grain. Analysis has shown that US Cordyceps mycelium on grain has low levels of beta-glucan and very high levels of starch. Nammex only uses 100% organic fruiting bodies which are rigorously tested and guaranteed for active compounds. Learn more about the mycelia myth and the 10 Questions to Ask about Your Mushroom Supplement.