In the marketplace today, the majority of products that called themselves Cordyceps sinensis are typically not genuine sinensis. That’s because these products do not contain actual fruiting bodies (mushrooms). They are mycelium based.

A look at the history of Cordyceps sinensis offers a fascinating story of an ancient traditional Chinese medicine entering the modern world. 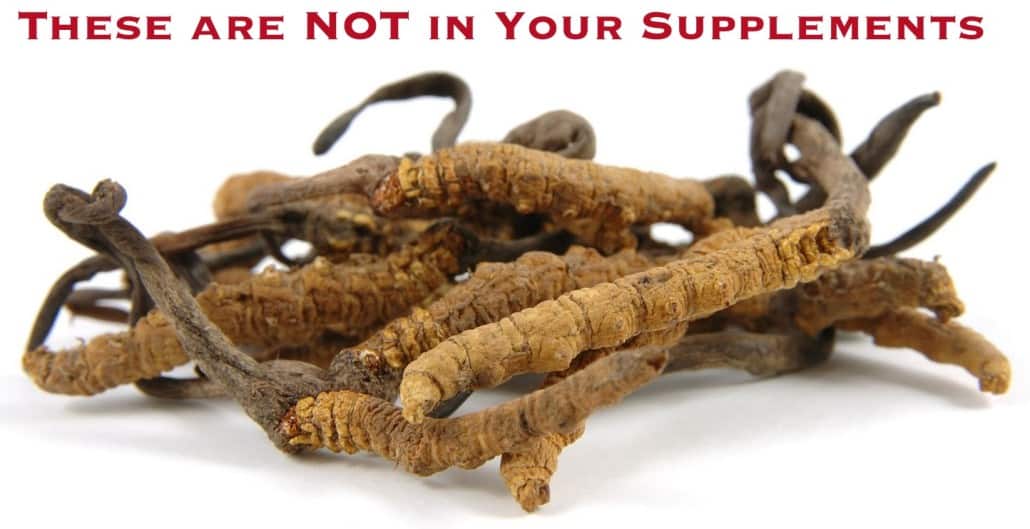 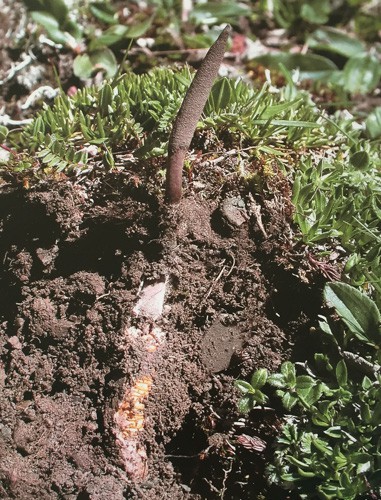 Ophiocordyceps sinensis is a fungus commonly referred to as Cordyceps sinensis. In China it is called called Dōng chóng xià cǎo, translated to “Winter Worm, Summer Grass” and in Tibet it is called Yartsa Gunbu. Winter worm, summer grass refers to the fact that it parasitizes and consumes a hibernating caterpillar over the winter and then produces a grass blade-like fruiting body in the late spring. This “caterpillar fungus”, is consumed caterpillar and all. It is commonly found in the soil of highland prairies at elevations of 3500 meters in the Chinese provinces of Sichuan, Yunnan, Qinghai and Tibet.

O. sinensis was first recorded in a 1694 Chinese Herbal and its use is at least 300 years old or more. It was officially recorded in the Chinese Pharmacopoeia in 1964 as an herbal drug. It is today one of the most famous of the traditional Chinese medicines and medicinal mushrooms. Due to its fame and popularity the wildcrafted supply has come under intense harvesting pressure making it the most expensive herb in China today. National Geographic recently referred to it as “Tibet’s Golden Worm”.

The current wholesale price is as high as US$20,000 per kilogram.

According to the State Pharmacopoeia Commission of PRC, 2005, O. sinensis is used for the treatment of fatigue, cough, hyposexuality, asthenia after severe illness, renal dysfunction, and renal failure.

Asthenia denotes a lack of energy and abnormal physical weakness, especially after debilitating illness, and this is a primary area of traditional Cordyceps use. Cordyceps is also prescribed for exhaustion and fatigue. Some have noted that this use of Cordyceps relates directly to its ability to enhance endurance and strength.

The search for the active principles in Cordyceps species has been ongoing for over 50 years. Although this research has identified a number of compounds that have shown activity, there are few unique compounds that occur in the quantities necessary to demonstrate strong species specific activity. For this reason, standards have been used that are common among other species of fungi. Mannitol and the nucleoside adenosine are two such compounds.

It is now believed that the polysaccharides in Cordyceps represent the most biologically active compounds due to their anti-oxidant, immunopotentiation, anti-tumor and hypo-glycemic activity. There is also an increasing body of research that indicates Cordyceps militaris may be an important key. Cordyceps militaris also possesses  immunomodulating and antioxidant effects. Cordycepin occurs in sufficient quantity to make it a genuine marker compound for Cordyceps militaris.

How this Relates to Today’s Marketplace

For the longest time, no one had been able to produce a mushroom (fruiting body) from a C. sinensis mycelium culture so mycelium is currently the only affordable and most used option for C. sinensis products in North America.

Only recently have the Chinese figured out how to cultivate this fungus to produce a mushroom. It first involves growing the hepialus moth which Cordyceps sinensis infects. Then they inoculate each moth with C. sinensis mycelium and incubate it in an environment similar to the Himalayan conditions. While cultivating the caterpillar fungus is now possible, the price tag has still not come down to anywhere affordable for the average consumer.

Meanwhile, wild C. sinensis (photo above) have become the most expensive mushrooms in the world. Bulk prices in China are around $20,000 per kilogram. With a price tag this high there is no way authentic, wild C. sinensis fruiting bodies could end up in any affordable product.

Despite this, the bulk of Cordyceps products typically show a photo of the caterpillar fungus on their labels even though their products do not contain them.

So What is Mycelium?

Mycelium is the vegetative body of a fungal organism and is somewhat similar to the root system of plants. It is the stage in the fungal life-cycle that gathers nutrients which enable the production of a mushroom. Unfortunately, today many so-called mushroom products, including Cordyceps, are made from the mycelium and not the mushroom.

With C. sinensis there are two methods of production. 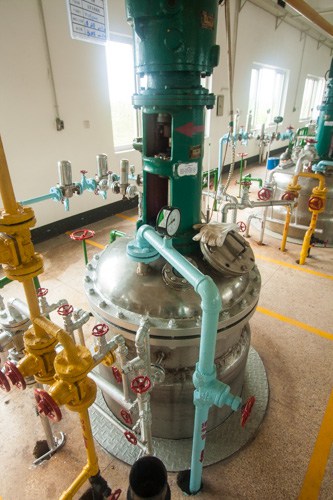 By the 1980’s it became clear to people in China who were working with and utilizing Ophiocordyceps sinensis that the supply was not keeping up to the demand for the fungus. This was reinforced by the ever increasing price in the marketplace. In fact, the Chinese government has named Cordyceps a National Treasure and instituted export restrictions in an attempt to bring some stability and control to the wild harvest.

Since the 1980’s numerous pure cultures were developed in China that claimed to be O. sinensis. Yet from all these pure cultures, only one scientist actually demonstrated the growth of a fruiting body. Mycelium that does not produce a fruiting body is called an anamorph, indicating this mycelial state. Numerous anamorphs were developed and called O. sinensis, with an anamorphic name also attached as a qualifier (ex. Paecilomyces hepiali). These anamorphs were used to produce large quantities of mycelium using fermentation technologies based around growing mycelium in sterile liquid media. The pure mycelium and sometimes the liquid were harvested, dried and sold as an alternative to the wildcrafted and very expensive O. sinensis. It should be noted that DNA analysis showed that many of these products were actually C. militaris, and not O. sinensis.

The most well known of these anamorphic products is called Cs-4. It was extensively analyzed in order to compare its basic nutrient and chemical profile to the wild Cordyceps. Amino acids and nucleosides were analyzed and compared. Then the Cs-4 was subjected to many clinical trials to see if it produced the same benefits and effects as the wild Cordyceps. By 1990, on the basis of positive clinical trials, Cs-4 was certified by the Chinese National government as suitable for use in TCM hospitals and it was recognized as a new and safe natural product drug.

If your Cordyceps product is mycelium made in China, it is likely Cordyceps Cs-4, considered to be a strain of C. sinensis made by fermentation technology, which means it should be 100% pure mycelium.

Cultivation of Cordyceps Mycelium on Grain 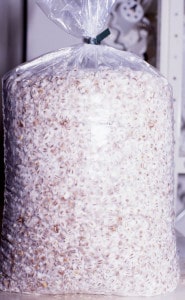 Fungal mycelium grown on grain. As you can see, the grain is still a major part of this product.

If a C. sinensis mycelium product is made in the USA, it is produced using sterile grain as the growing medium (a solid substrate rather than a liquid). The mycelium is grown out on the grain and when ready for harvest, the mycelium and grain substrate are then dried and ground into a powder.

The issue here is that the grain ends up in the final product, which becomes a mixture of mycelium and grain.

Tests have shown that since Cordyceps mycelium grows very slowly, the starch content of mycelium on grain can be upwards of 65% due to the residual grain while the mycelium content remains very low.

For reference, pure fruiting body products typically have less than 5% starch. Not only is there a high starch content and low mycelium content, there is no research based on Cordyceps mycelium grown on grain. High starch content can easily be confirmed at home by doing a simple iodine starch test.

The final question is the actual authenticity of Cordyceps sinensis cultures. In a recent workshop on product adulteration, the lead scientist for Authen Technologies, a DNA sequencing laboratory, stated that of the dozens of C. sinensis samples submitted for testing over the last 5 years, only one was authentic. 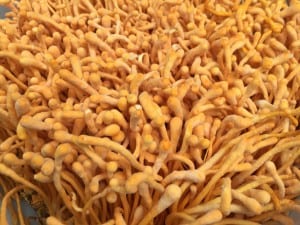 This also means there is absolutely no confusion as to the actual identity of the fungus since C. militaris is easily identified. Companies now have the opportunity to source Cordyceps in an organically certified cultivated form rather than a mycelium based product.

Best of all, the price is affordable, making the use of Cordyceps possible on a much greater scale.

Cs-4 is pure mycelium, but the quality of the many Cs-4 products can be variable and it is often filled with carriers. USA produced mycelium on grain has no research to support it and is mostly starch from the residual grain.

At Nammex, after all our analysis and research, we can confidently say that Cordyceps militaris is a breakthrough product that provides all the benefits of cordyceps that people are seeking.

How to Grow Liquid Culture Mycelium

10 Questions to ask About Your Mushroom Product

How are your Mushrooms Produced?

What's the difference between mushroom, mycelium and mycelium on grain?