When it comes to mushroom products, the term “Full Spectrum” gets used a lot.

It is an interesting statement, but what does it mean?

Is it simply a marketing gimmick?

An examination of this statement shows that U.S. producers of mycelium are primarily claiming that their product has all of the fungal parts: mycelium, mushroom, and spores.

In addition, they claim the presence of secondary metabolites and extra-cellular compounds that they maintain are secreted by the mycelium into the sterile grain which their mycelium grows on.

So they are proposing that their products contain a complete menu of what is important in a “medicinal mushroom” product.

An accurate definition of Full Spectrum would be a product that has the full complement or complete range of typical or possible elements, as in nutritional and medicinal compounds.

Let’s break this down and see what it really looks like.

The Presence of Mycelium

There is definitely mycelium in these products but the question is, just how much?

U.S. producers of mycelium actually grow their mycelium on cooked, sterilized cereal grain (rice, oats, sorghum, etc). What they don’t talk about is that the grain is not separated from the final product so it is not 100% mycelium like often assumed, but a myceliated grain, very much like the food product called Tempeh. 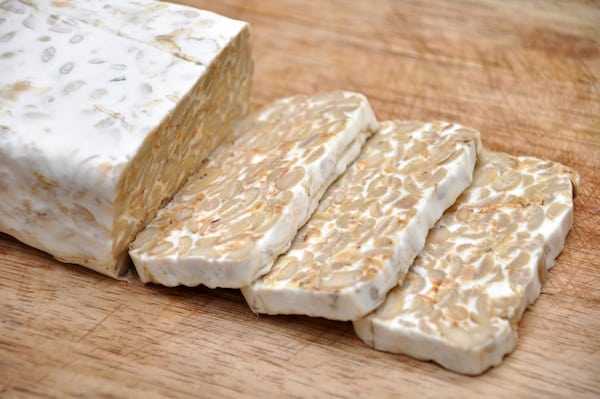 Tempeh is a traditional food product of Indonesia. It consists of growing a fungus on cooked soy beans, a process similar to mycelium grown on grain. Yet Tempeh is sold as a food product and not a dietary supplement.

How much of the final product is mycelium and how much is grain?

Nammex alpha-glucan testing has determined that U.S. grown mycelium on grain, what we refer to as MOG, is mostly starch from the residual grain. This was also confirmed in the McCleary & Draga paper (1).

Low ergosterol and low beta-glucans (see Active Compounds below), along with high alpha-glucans confirm that the amount of mycelium in MOG is minimal.

The Presence of Mushrooms

Since the ratio of mycelium, mushroom and spores is never given for a “full spectrum” MOG product, one must take their word that mushrooms are present.

Mushrooms contain very low levels of alpha-glucans in the form of glycogen. They do not contain starch.

Due to this, if a MOG product has any significant amount of mushrooms included, the levels of alpha-glucans should be lower and beta-glucan numbers should be higher.

Mushroom vs Mycelium on Grain. Beta-glucan analysis using the industry standard Megazyme test. Note that a simple starch analysis will give the same results for alpha-glucans.

Primordia are Not Mushrooms

The presence of mushrooms claim is often substantiated by claiming the presence of primordia growing on the mycelium colonized grain. Primordia are the initial aggregation of mycelia that precedes the actual mushroom stage. But primordia have not differentiated at this stage and are still just a small knot of mycelium. 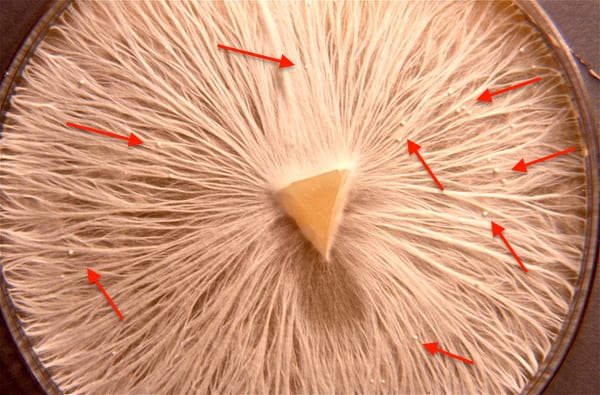 This petri dish is 3.5 inches in diameter. Each tiny primordia is a millimetre in size.

As you can see, primordia are very tiny and would contribute very little to the overall quantity of a MOG product.

If mushrooms are added externally after the MOG is harvested then the distribution of each should be noted in separate line items in the Supplements Facts panel on the product label to give consumers accurate information with which to make informed purchasing decisions.

The Presence of Spores

If a product contains spores, it must first have the mushrooms that produce the spores. Without mushrooms, few spores, if any, will be present. Spores are not digestible or a proven active part of the fungal organism so their presence or lack of presence is not an important issue.

Whole spores have no proven medicinal value. This is why reishi spore products are “cracked” or “broken” prior to sale.

The Presence of Grain

What is often overlooked and unstated is the presence of grain in a MOG product. Nammex analysis of MOG products has shown alpha-glucan numbers from 30-60%. This is almost solely in the form of starch which comes from the residual grain which is not fully consumed by the mycelium. 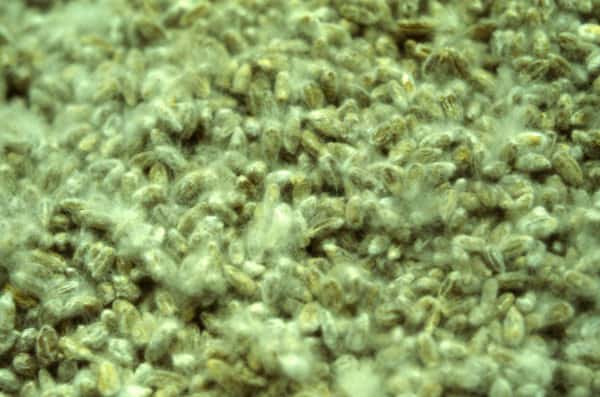 Mycelium growing on grain and the grain is still easily distinguishable.

Can a mushroom product be a complete representation of these fungal organisms if it contains 30-60% starch?

Analysis shows that MOG products contain a significant amount of residual grain and this has been measured as high levels of alpha-glucans in the form of starch.

The Presence of Active Compounds

Mycelium on Grain has low levels of the important beta-glucans.

If a MOG product has low amounts of beta-glucans this would indicate a lack of actual fungal material. It would also demonstrate a critical deficiency.

The Presence of Secondary Metabolites

Secondary metabolites are well known in mushrooms and produced in quantity.

As seen above, the difference in beta-glucans and alpha-glucans confirms the lack of mycelium in mycelium grown on grain and the high presence of starch. This also demonstrates that pure mycelium also has low levels of alpha-glucans. 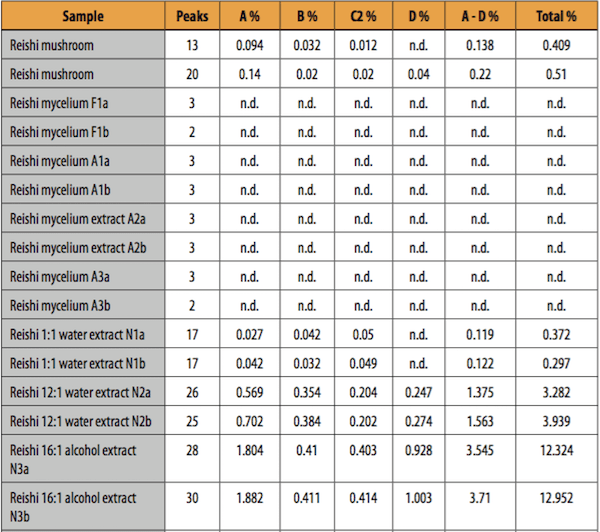 There is little to no research that demonstrates beneficial levels of secondary metabolites are being produced by mycelium grown on grain. In fact, the opposite has been shown.

The Not So Full Spectrum

It is clear that MOG products are not full spectrum in any true sense of the term. Despite claims, analysis shows that they lack fungal material which corresponds to lack of active compounds and high levels of grain starch. 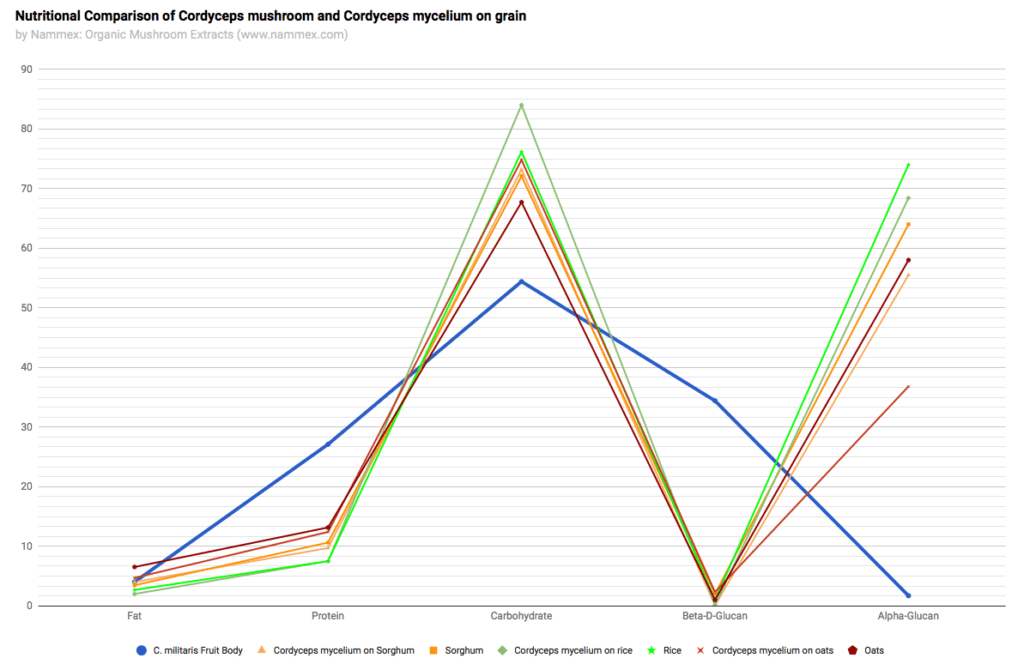 Nutritional analysis of Cordyceps mycelium grown on grains showing that these products closely mirror the grain itself and not the true Cordyceps mushroom.

It is seriously misleading for a Mushroom product to be called Full Spectrum if it contains 30-60% grain starch. That is not a true representation of these fungal organisms.

A genuine mushroom product has high levels of beta-glucans and low levels of alpha-glucans. It also has triterpenoids and ergosterol and a profile that conforms to the mushroom, not the grain.

This fact was confirmed in recent research by USP (United States Pharmacopeial Convention). They determined through a number of analytical methods that only 5 of 19 samples of reishi mushroom products could actually be considered genuine. Three of those 5 samples were extracts from Nammex. (2)

If you are looking for a truly beneficial mushroom product, it is the mushroom itself that has the full complement and complete range of nutritional and medicinal compounds. The mushroom, traditionally used for centuries and scientifically proven, is genuinely Full Spectrum.

How to Grow Liquid Culture Mycelium
How are your Mushrooms Produced?
What's the difference between mushroom, mycelium and mycelium on grain?
Cordyceps Supplements: What You Need to Know
Why Growing Mushrooms in North America is not Economical for Health Products
10 Questions to ask About Your Mushroom Product
Subscribe to Nammex News

The Vegetable Gardening Show with Mike Podlesny
Scroll to top